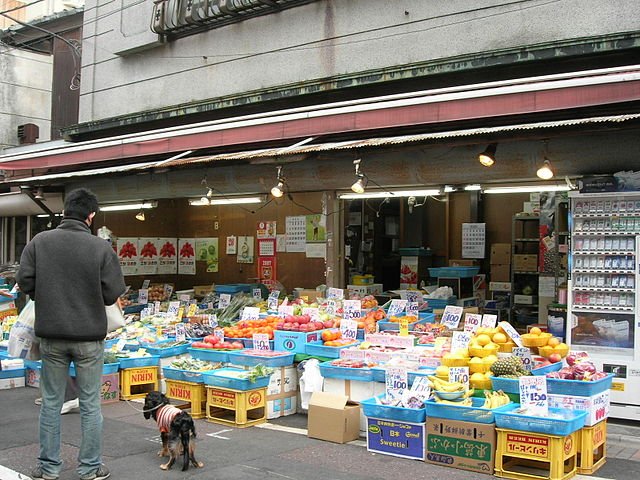 I suppose that anyone who has studied Japanese, has ever wondered about the origin of the word yaoya (八百屋) which, by the way, means greengrocer.

I admit that the first time I came across that word, I thought that it would read like the number 800 (八百→happyaku) and then the shop suffix ya (屋) (happyakuya) and that it would mean 800 shops, that is, a place where there would be many establishments.

However, when I found out its real pronunciation and meaning, I was quite perplexed. Sometimes, we can deduce the meaning of a word from the idea of the kanji; however, in this case, it was impossible to relate both. One had to believe the meaning provided and move on.

Recently, and with the idea of writing about curiosities of the languages in this blog, I remembered the word again and decided to investigate on the Internet about its origin. I realized that even the Japanese wondered about it.

Among the sites I visited, the one that gave more detailed explanations was the blog about the origin of words (in Japanese). Manabu, its author, explains the origin of the word greengrocer. I summarize what he says and add some comments below:

Origin of the word yaoya

At the beginning of the Muromachi period (1336-1447), the maids at the imperial court started calling all vegetables and fruits aomono (青物), that is, green things… but, wait, didn’t it mean blue? Now it turns out that the Japanese are color-blind and green is seen as blue like, for example, the traffic lights? No, it’s nothing like that, there is a reason for that and we’ll see it in another post in this blog.

Returning to the topic at hand, the word aomono became popular and finally the shops that sold vegetables received the name of aomonoya (青物屋). With time, the name got shorter and it became in aoya (青屋).

But then, when did it become yaoya and why?

The change in pronunciation

What about the designation of the kanji? Why those and not others?

Finally, the question of the kanji.

Well, it seems that in Japanese there is an expression that says yaoyorozunokami (八百万の神) which means “all the gods and goddesses”. It is precisely the parallelism between the plurality of gods and products that the Japanese had in mind to form the word yaoya (八百屋).

This is the form that has prevailed until today.

Isn’t it interesting? We will be happy to hear your opinions (or knowledge) in the comments.

Truly, I think it is curious how a word can transform over time for the most unsuspected and simple reasons.

Until the next publication!